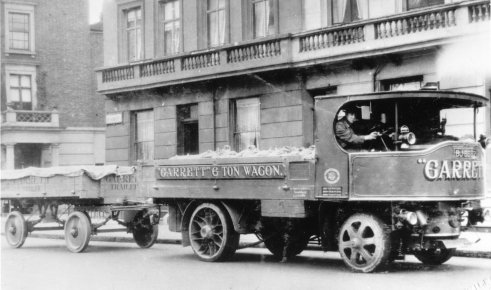 The above trailer was built in 1924 by Richard Garrett & Sons Ltd. as the prototype of a new range of trailers with steel wheels and solid rubber tyres for use with steam wagons. Garretts used it for demonstration purposes with lorry number 34371 as shown in the above photograph. In January 1926 Garretts sold the trailer with second-hand undertype lorry number 34181 to Blackstone & Co. of Stamford, Lincolnshire, a fellow member of Agricultural & General Engineers Ltd. The punitive effect of changes in the taxation of vehicles on solid rubber tyres in 1934 was probably the reason that Blackstones sold the lorry to the Derbyshire Carriage and Wagon Company, who converted the wagon into a railway shunting locomotive for use in their works. However, Blackstones kept the trailer for internal use and it was spotted by Terry Lee of Leicester in 1989. The trailer was still at work carrying diesel engine castings around the works although in a very dilapidated condition, having been grossly overloaded and abused as could be expected for a trailer used internally. Terry passed the information about the trailer to me and when the opportunity arose I visited Blackstone's works. Following negotiations with Blackstones I was able to purchase the trailer for preservation. The trailer had been modified by reducing the height of the spring hanger brackets to lower the height of the body; but these modifications have been reversed and the trailer is now being restored for use behind Garrett Undertype 34841.

A number of similar Garrett trailers have survived in preservation and I am attempting to compile a register of the survivors. If you have any information or photographs of Garrett trailers I would be pleased to receive details. Details of the trailers we are aware of can be found on the following page: Surviving Garrett Trailers.